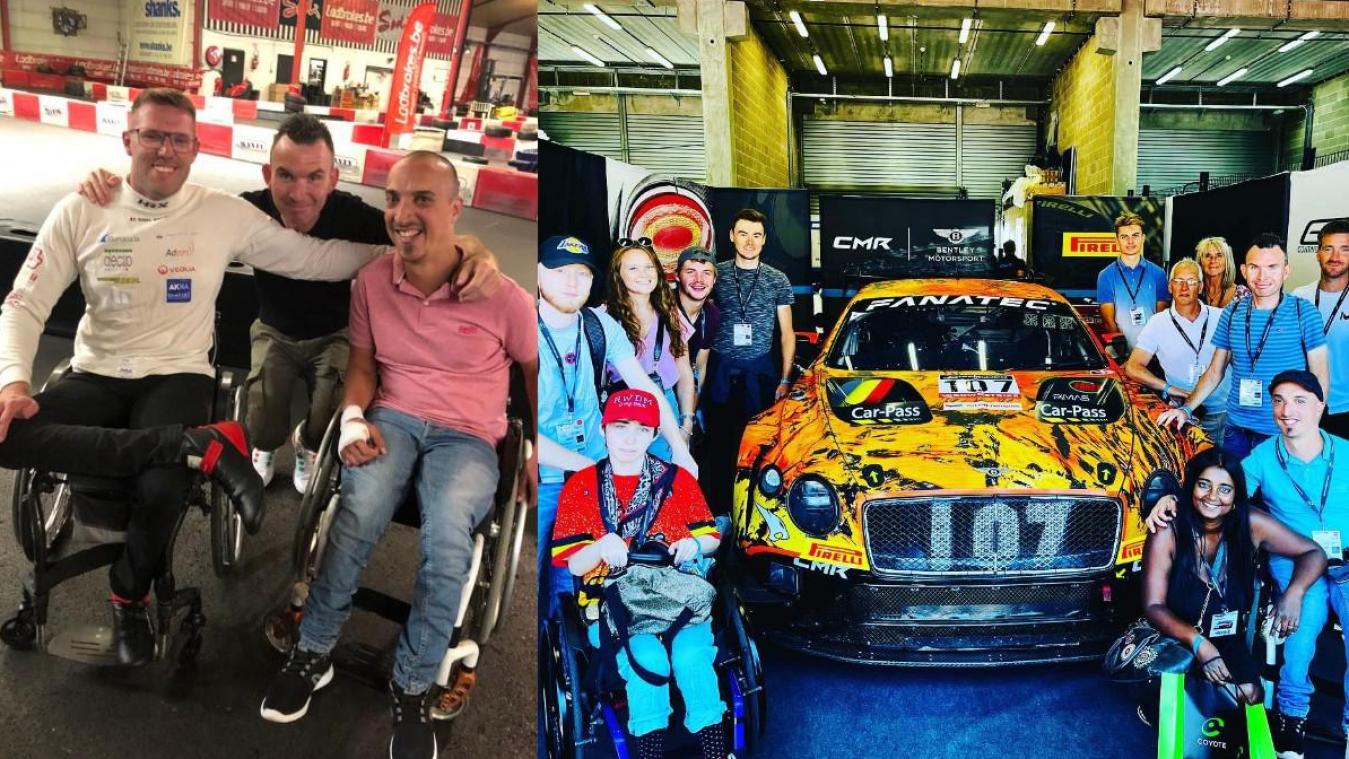 Disabled and... pilot at the 24 h of Spa: Nigel Bailly, supported by his friends from Soignies

While his lower body is paralyzed, Nigel fought against the centrifugal force, powering his car by the strength of his arms alone.

His recent performance in the 24h of Spa, he also owes it to the support of two people from Soignies.

Focus on Nigel Bailly, one of the most talked about drivers of the last 24h of Spa-Francorchamps which took place this weekend. With his able-bodied teammates, this sportsman from Trazegnies took up an incredible challenge by participating in the mythical race, despite his infirmity.

Paraplegic since a motocross accident at the age of 14, Nigel has never given up on his dreams. He had already participated in the 24 hours of Le Mans. On Saturday, he dared Spa-Francorchamps.

A dream that could start thanks to his friend Christophe De Coninck, from Soignies, who is also confined to a wheelchair.

"I'm a motorsports enthusiast myself," says Christophe, 38, who has been deprived of the use of his legs since a premature birth that went wrong. "Nigel's willpower amazes me. I admire him like never before. Over time, we have become close. When I heard that he was dreaming of racing in the 24 Hours of Spa, I told him that I knew someone who could help him realize his dream".

Thanks to the Ladbrokes Foundation

And that someone is Jean-François Lenvain, whom Christophe has known since the benches of the Saint-Vincent college in Soignies. For 20 years, the two men have been deeply linked thanks to the ASBL "Tous à bord" created by Jean-François and which multiplies activities and sports exploits mixing able-bodied and disabled people. "So I knew that this meeting between Nigel and Jean-François would be fruitful.

Jean-François Lenvain has been entrusted by the Ladbrokes Foundation to lead the great project "One + One Give and Take". A concept that combines the sporting exploit with the human dimension.

Expensive and elitist, motorsport requires sponsors and a substantial budget. But the foundation is looking for emblematic athletes for whom it agrees to put the means...

When he met Nigel, a little before the Covid crisis, Jean-François immediately understood how phenomenal the disabled athlete's will was. With the help of Ladbrokes, he proposed to allow a series of people with disabilities to be inspired by his life's journey by living his incredible 24-hour challenge from the inside and at his side. And this, by taking place on board a Bentley transformed into a real work of art by the famous contemporary artist Jean Boghossian (one of the few in the world to apply fire and smoke on his works). The goal is then to put the car up for auction. This will benefit the ASCTR (L'Association Sportive du Centre Traumatologie Réadaptation) which supports people in revalidation following life accidents.

This Saturday, Christophe De Coninck was among the privileged guests of Nigel. "Unforgettable!" he commented. "I am a soccer fan. My idol is Cristiano Ronaldo. But motorsport takes me back to my wildest dreams. The speed, the roar of the engines, the adrenaline rush of being in the paddock... It was just crazy. Along with other guests with disabilities, we were also able to measure Nigel's incredible performance. The whole race was based on his trunk and his arms. It's a physical ordeal that is hard to imagine. And then there's the extraction when changing drivers with his able-bodied teammates. Getting out of the vehicle when you are paraplegic is an additional ordeal".

Unfortunately, a technical problem prevented the car from going all the way. "That doesn't take anything away from the value of the feat," Christophe concluded. "Nigel's gift to me is that of a dream come true. Humanly and morally, it is priceless".

Because we can't even imagine the strength of will that it takes, even if it's only to live with the handicap day after day. "Yes, pain is a daily companion," admits Christophe when we ask him. "I still have to undergo surgeries and there are times when the pain leaves me bedridden in the fetal position. I can imagine what Nigel overcomes by pursuing a high level sport".

Christophe took the opportunity to launch a bitter message: "People with disabilities have to fight and struggle for even their most basic rights. And I'm not even talking about heroes like Nigel. But the reverse is very rarely true. Society rarely meets our needs. And yet, disability is right under everyone's nose. An accident or the passing years can put anyone in a wheelchair. To be concerned about others is also to think about oneself. But people don't want to see that".